After the defeat in the Battle of the Ebro the Republican army is on the threshold of defeat. The republican population begins a massive escape to France and little by little the military, in an orderly or deserting way, is joining them. Nationals gain ground day by day and the fall of the Second Republic is expected imminent. 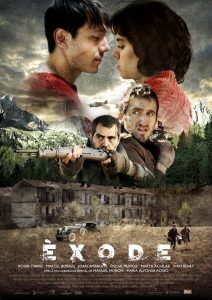 That is why Guillem decides to abandon his Republican battalion and flee in search of his beloved Maria. They became boyfriends before the war began and now they have not seen each other for many months. The reunion is pure happiness, passion and sex, but the tranquility lasts only a few days: the national army is unstoppable and Guillem and Maria are forced to flee their home and leave, like many others, to France.

Pertegás, suitor – without any possibilities – of Maria while Guillem was in the front, will not assume that Maria flees with a failure like him, so he will start a life or death persecution after the couple.

The two, on their way to the border, know Antoni, a homosexual republican soldier fleeing national repression and the homophobia of the republican army. The three flee together to the border when they are surprised by a national squad that takes them prisoners. Guillem and Antoni are captured but Maria manages to escape. From here the two lovers take different paths, but with the same objective: “Whatever happens, we will meet in La Junquera and cross together to France.”