EBRO, FROM THE CRADDLE TO THE BATTLE 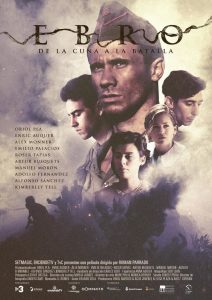 EBRO, FROM THE CRADDLE TO THE BATTLE tells the story of five young men from “La Quinta del Biberon” that were recruited to participate in a key battle of the Spanish Civil War.

The story takes place on April 1938 when the president of the Republic, Manuel Azaña, orders the movement of thousands of young men between 17 and 18 years old so that they will join forces against Franco’s troops. These young men were names “La Quinta del Biberon” (The five with the baby bottle), because of the soldiers’ young age.

Between these young men that were sent to Ebro battle, we can find a Pere Puig, who had to leave his shepherd life to Fermi Quinatana, who enlisted voluntarily to find his missing brother; Valenti Godall, a self-proclaimed anti-fascist; and Jaume Comelles, a seminarian who’s always scared because colleagues like Marti Claret, anticlergy, look at him with hate and as an enemy. Ebro, from the crib to the battlefield, tells the story of these five young men who are forced to let go of their innocence between whistles and bullets. Their destiny will become unforeseeable.

While all of this is happening, the high-ranking generals of the government of the Republic are trying hard to lure French and England in. On one side Manuel Azaña, president of the Republic, tries to achieve a peace that will cause less deaths. But on the other hand, there’s Juan Negrin, government president, who wants to drag out the resistance until he can get international help but his chances of getting that look slim. Meanwhile, our five stars continue to fight down the river, sweating, killing… and maybe, dying.